By Hiatus RanchMarch 4, 2021No Comments 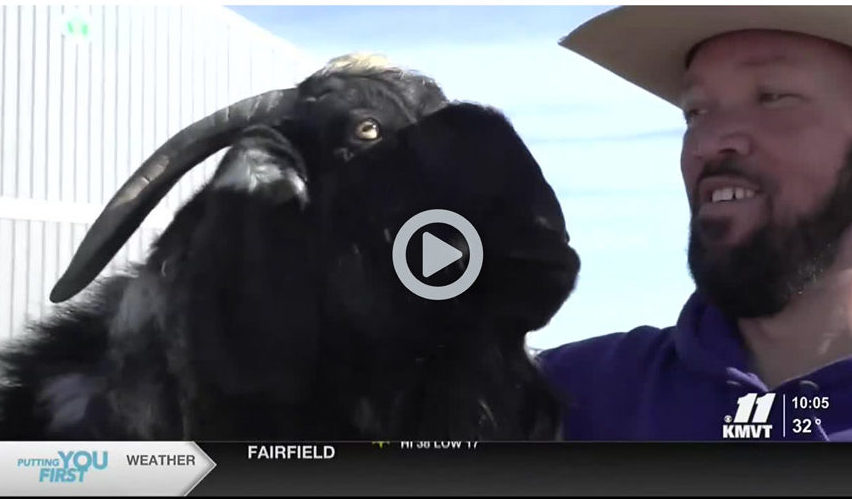 Thirteen-year Army combat veteran Joshua Burnside owns a 42-acre ranch outside of Shoshone, and said the tranquil lifestyle and working with farm animals has helped him transition back to civilian life.

By Steve Kirch
https://www.kmvt.com/2021/03/04/lincoln-county-man-starts-silent-auction-to-help-launch-rehabilitation-ranch-for-combat-veterans/
SHOSHONE, Idaho (KMVT/KSVT) — A Lincoln County man is in the process of starting a rehabilitation program for combat veterans on his ranch, but before he can launch the program he is going to need a little help from the public with raising funds.

Thirteen-year Army combat veteran Joshua Burnside owns a 42-acre ranch outside of Shoshone, and said the tranquil lifestyle and working with animals has helped him transition back to civilian life.

The city boy from Tennessee credits the lifestyle change that started in 2015 with helping to save his life. That year he came out to Idaho through Higher Ground of Sun Valley to volunteer at a veteran ranch rodeo in Bellevue at River Sage Stables.

“I fell in love with and went full fledge with it,” Burnside said. “There is not a day that doesn’t go by that I don’t give credit to that week of coming out here. That was a turning point for me.”

He sad the thing he likes most about the lifestyle is that it gives him a sense of purpose. Burnside said no matter what the weather is like outside you still have to get up and show up to feed the animals and take care of them.

“It gives you that sense of purpose when you don’t want to get out of bed but you still have to,” he said.

On his ranch, he has everything from horses and cows to alpacas, and he said most of the animals are rescues that needed a second chance. Burnside said he sometimes identifies with the animals more than humans.

“Unlike humans, animals are nonjudgemental,” he said. “They don’t talk about you behind your back, and they are just loving and so forgiving.”

Burnside said he now wants to pay it forward and start a free rehabilitation program for combat veterans on his property called Hiatus Ranch of Idaho. The program will be a minimum of 30 days and will be offered three to four times a year for two to five veterans at a time.

“So what we will do when they come, we will offer an equine program, basic animal husbandry,” Burnside said. “We also have financial advisers who will help them get their finances back on track. We also teamed up with hyperbolics (Hyperbaric Health and Wellness Foundation), and with Higher Ground of Sun Valley so they can participate in recreation therapy as well.”

He said he put the program at a 30-day minimum because he knows how everyone is different. Burnside said it might take one person 45 days, and it might take another person three months.

“We are not going to send them away until we know they feel like their rehabilitation is completed,” he said.

His friend Ashley Ramer, who also works on the ranch with him, said she thinks the program he is trying to start is a great idea because there is really nothing like it in the area.

“It’s a very therapeutical experience, and it can do a lot of healing for people who need help,” she said.

Burnside said everything will be provided for the combat veterans at no cost — everything from picking them up that the airport to free meals and housing. But before he can get the program started he needs to build a five to six-bedroom housing unit on his property and to help finance the project he started a silent auction on March 1. The auction goes until March 15.

“We have a lot of veterans that have donated handmade items from wooden flags to hand-made leather items,” Burnside said. “So we have local people up in the valley that has donated diamond jewelry, high-end photography, massages. We have a local guy here in Lincoln County that donated hay.”

“My heart and soul is in it, or else I wouldn’t have purchased the property,” said Burnside. ”Even if I only have the opportunity to save or change one person’s life it will all be worth it.”